WIS first started databasing its collections in 1992.  What began as a homemade system using a Paradox relational database grew quickly into the WI Botanical Information System.  This database was migrated in 2013 into the NSF-sponsored Specify 6 platform, which now serves as the foundation for WIS’ virtual herbarium.  From the beginning, specimens were barcoded using GUIDs, and protocols established for off-site database backup and storage. 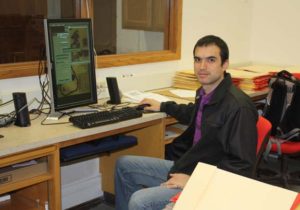 The evolution of WIS’ virtual herbarium has not taken place unilaterally, since the Herbarium serves as the hub for a mostly in-state consortium of 26 partner herbaria that have collectively contributed ca. 400,000 specimen records to the WISFlora database hosted by WIS.  Our type specimens and those of our Midwest regional partners have been digitized following standardized protocols and are now available through JSTOR Global Plants, and we are directly engaged with the national iDigBio effort through leadership and participation in several NSF-funded Thematic Collections Networks that harvest WIS data.