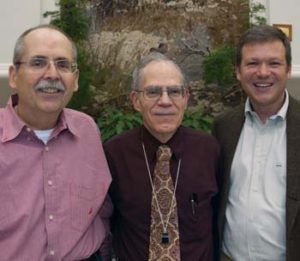 Today marked a milestone in the history of the Wisconsin State Herbarium as Mr. Theodore S. Cochrane, Senior Academic Curator, retired after more than 42 years of service. Ted was raised in Beloit, WI and attended the University of Wisconsin, Madison where he earned his B.S. and M.S. degree in Botany. In 1970 he was hired as a Curator and would eventually become recognized as one of the state’s leading authorities on the flora of

Wisconsin. His dedication to plant collecting, identification, and conservation were recognized by the department at a luncheon and reception, which was attended by current and former students, faculty, and colleagues, including a large number of biologists from the Wisconsin Department of Natural Resources. Everyone in attendance commented on the unparalleled knowledge, dedication, and work ethic exhibited year after year by Ted for more than four decades. He and his wife, Barbara, intend to travel more than they have in the past now that he is retired, but Ted expects to continue working as a volunteer in the herbarium on a regular basis for the foreseeable future. Congratulations!