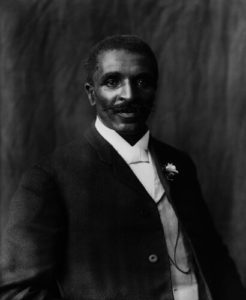 At least 25 specimens of fungi that infect plants, collected by George Washington Carver more than a century ago, were re-discovered Feb. 8 in the Wisconsin State Herbarium at the University of Wisconsin-Madison.  The herbarium holds one of the nation’s largest collections – as many as 120,000 specimens – of “microfungi,” a type of fungus that does not form a mushroom.

Carver (c. 1864-1943) was a prominent African-American scientist with a long record of achievement. Born a slave in Missouri, he became the first black student at what is now Iowa State University, then its first black faculty member. He spent 47 years directing agricultural science at the Tuskegee Institute, which was established during Reconstruction to educate blacks.  Although best known for his research on, and advocacy of, peanuts as a profitable, nutritious crop for southern farmers, Carver had many other interests, including the collection of microfungi. 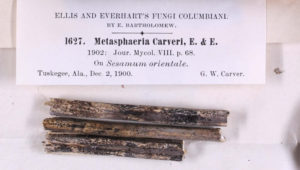 The discovery of fungal samples collected by Carver did not surprise William Jones, a professor of history at UW–Madison who teaches about the civil rights movement. “At Tuskegee, he studied blights as well as agricultural techniques and established agricultural stations to train black farmers in agricultural technology. This is similar to what UW-Extension does: empowering farmers with the knowledge to help them succeed.”

History’s perspective on Carver has changed, says Jones. In the late 1800s and early 1900s he, like Tuskegee founder Booker T. Washington, was considered a paragon of the race — a symbol of achievement for the newly freed slaves and their descendants.  For more information see the following . . .